The story of prototype started AGES ago…

We messed around with house beers for many years and it may interest you to know that the cask ale lines in North were actually a late addition, arriving in 2003, expanding to two lines in 2004 and then adding a dark beer line in 2008 (we got a CAMRA pub of the season for adding one or two, nothing since though!) Before that we were all about keg from the US, Belgium and Germany (what you might call ‘craft keg’ or something similarly ridiculous now) plus a suitably broad range of bottles. The first house cask ale in North was from Roosters brewery, then under the stewardship of the legendary Sean Franklin, the man widely credited with the first importation and use of US hops in the UK.

We took the decision to try and insulate the price of our house beer around the time the beer tax duty escalator really started to take its toll and in 2008/9.  We needed to commit to a strong brand and solid tasty beer. Roosters side project Outlaw brewery provided the tidily branded and NZ hopped Wild Mule. At £2.50 a pint it quickly became a favourite and we’d pile through barrels. Mule was with us for 4 years and we loved it but once Sean decided to move on we took the chance to review the situation. It wasn’t that we didn’t want sell Roosters any more (the new owners the Fozard brothers are doing a brilliant job and I’d say they’re ones to watch in 2014) just that we like to keep things fresh and explore other avenues.

So we needed a beer at around 4% and we needed it at the right price to make it a first pint no brainer. Many were considered from the super hoppy & dry Moor Top from Buxton, a range from ever impressive locals Ridgeside to various from perennial favourites Thornbridge. We almost struck a deal with Marble but it didn’t really work out!! In the end the answer was staring us right in the face – Kirkstall brewery had opened relatively recently and we go back a LONG way with Steve and John, also they are just down the road so the beer miles were negligible (3), the added extra was that we could brand it however we wanted and of course try a bunch of different recipes till we got it right.

We created a straight forward base with Kirkstalls head brewer at the time – Dave Sanders with low colour maris otter & a dash of wheat malt. Then hopped it initially with Cascade for the big citrus flavours, Goldings for that juicy British feel and then initially a high alpha hop Apollo. The initial brew was banging but it met a mixed reception – some found it a little on the dry side (I didn’t) and so we changed up the ultra high alpha acid Apollo for a softer Polish hop Marynka. We also experimented with dry hopping and produced 5 different beers.

We liked 3 & 4 best  – and put it to a customer vote on the pumps in North, the Cross Keys and Further North before our 15th Anniversary on the 1st of July 2012. And it passed that Prototype 3 was the winner. We’re selling more of it that ever and recently Kirkstall decided to go wheat free so ther’s now a touch of vienna malt in there in place of the wheat. 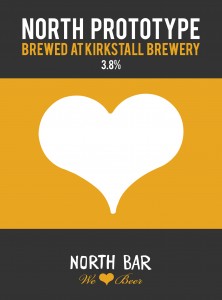