If you weren’t at North Bar for Halloween on Saturday, you missed one hell of a party.

No, really. You could be forgiven for thinking that October 31st in Leeds City Centre is essentially a collection of racist fancy dress costumes and nasty booze. And yeah, there is some of that… a fair bit of that.

So we were keen to do something really good, and boy did we deliver.

First up, we loaded our taps full of Magic Rock beer, which was nice. Plus, we were ecstatic to be able to finally introduce the much-anticipated Magic Rock cans to North Bar customers. Did you manage to gets your hands on one? Bad luck if not because THEY’RE AMAZING. 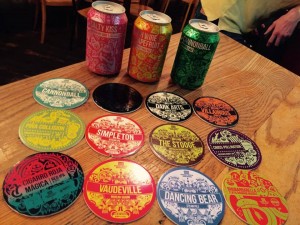 Is there any sight more beautiful on this earth?

Which brings us on to our next treat of the evening. Not only did we have a free photobooth all night, but we also had the most splendid competition. Anyone who took a snap, and then tagged themselves in the picture on Facebook, is in with a chance of winning our grand prize… A six-pack of Magic Rock cans! Are your pictures up? Check here. 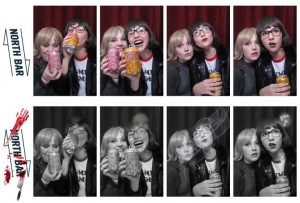 Oh just look how much Rebecca and Enid from cult graphic novel Ghost World are enjoying their cans of Salty Kiss and Grapefruit Highwire. What fun.

Meanwhile, Superstar DJ Fresh Out the Barrel was playing the most excellent tunes with a spooky edge. (There was a order from on-high that he not play the Ghostbusters theme all night, a rule with mixed reactions ranging from utterly nonplussed to mildly relieved.) He also wore a hat made of sausages so, y’know, that was pretty ace. 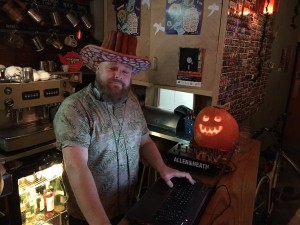 Look at it! It’s sausages! Sausages! What a world we live in, eh?

And then, there was the highlight of the evening. All night we were entertained by the mad-skills of Chloe from Fire Fairy, and Sophia aka Bella Tricks, who spent the evening stilt-walking, breathing fire, hula-hooping, and basically bossing it all over New Briggate.

Sophia Wheatley aka hula girl down at @northbardrinks for #halloween

Soph is in the house! #Halloween #halloween2015 pic.twitter.com/hDF4rb9tem

By the way, these women are better at this than most of us will be at anything in our lives.

Huge thanks to Chloe and Sophia, who not only gave fab performances, but also handled all the passers-by who “just wanted a quick go” like total pros.

So, sucks to be you if you didn’t make it over. Don’t let it happen again. And, you never know, we had such a good time maybe we’ll do it again next year…

← Norse, Lervig, and Indy Man Beer Con
What’s Try January and why do we keep going on about it? →